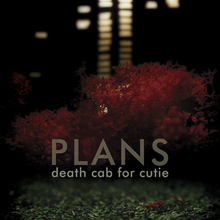 Death Cab for Cutie is the first band I think of when I think of bands that I probably wouldn’t have heard of if I hadn’t gotten into file-sharing for a bit of time. Still, back in 2005, I did get into file sharing and at some point when Becky was beginning to hold my interest–she and I met in March of 2006–I heard the song “I Will Follow You into The Dark,” and the legal purchase of Plans was the acquisition of an album that has become one of my most dear.

This album has several songs that could be my favorite, depending on the day. “Soul Meets Body” was a big one for us early in our hanging out, but it’s hard for me to imagine “Crooked Teeth” not being the best of any collection of songs it might be part of.

Those three songs did well enough on the US Alternative Music chart, and both the album and “I Will Follow…” were nominated for Grammy awards.

The other songs stand up well, too. Eight of them bring the album’s total to eleven. This being an indie rock album, I can’t imagine it’s possible for an eleven-song album not to have its low points, but those are higher here than they are on some of the band’s contemporaries. That is largely due to lead singer Ben Gibbard’s talents as a wordsmith. He can take a song that isn’t necessarily going to make anyone’s socks roll up and down and turn it into a special thing, with that little slice of life thing he’s got going on. If Anton Checkov, the great Russian slice of life writer, wrote the lyrics for a pop album, they might read something like the work that Mr. Gibbard puts out.

Here you have a couple that have distanced to the point that they sleep “like brothers on a hotel bed,” you wait in an ICU “that reeked of piss and 409” with a family as they wait for the death of a loved one “in a place where we only say goodbye,” and you watch as the children of summer peel the time of life away with the dead skin after sunburns.

This album has that quality of some great albums where, not every song is your favorite, but they’re each so interesting and distinct that you can imagine that they are someone’s.

These songs have become just good lazy day house-cleaning music for me. There ain’t nothin’ to excite the spleen here; even when dealing with the harder topics, these men play their music in the breeze, chillin’ on the porch with JJ Cale, not worrying about being famous or even well-liked, just gettin’ together with their instruments and toolin’ to see what happens. Might as well be bowling.

And that is Death Cab for Cutie’s fifth album, Plans, for me. It is one of three albums that I really associate with coming to know and love my wife, and if I’m over for dinner you sure ain’t gonna piss me off if you play it.