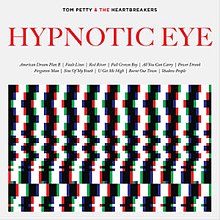 Lots going on, friends, so you get one from the archives. I hated hearing that Tom Petty died from opioid pain killers. Talk about putting yourself out there for your art; Tom’s life on the road had just battered his body to no end, and he even did the last tour with a broken hip. From what I’ve read and heard, it wasn’t a situation of abuse where the painkillers were concerned, rather he was just trying to kill the pain. Let me say that again: He did his last tour on a broken hip. I didn’t see any of the dates on that tour, but I would have a new appreciation for the man and the show knowing this.

So, from October of last year, here’s my review of Tom and the Heartbreaker’s final abum, Hypnotic Eye; it’s one of my favorites.