The other day I was standing beside one of those conversations that begin like this:

“Wouldn’t the world be so much better if everyone was nice?”

It would be boring. Just like it would be boring if everyone was Christian, Democrat, or open-minded. Good things are good things because there are bad things to show us that they are; so, life is probably better that everyone isn’t the same. The saying “variety is the spice of life” comes to mind, and I agree that it is. Variety makes things interesting.

Still, there is one area where I wouldn’t hate it if we weren’t all the same. I think I would like it if we were all always punctual.

I don’t have this desire for myself. I don’t suffer much because of the tardiness of others. In fact, I only came to this page because of something I read in the new Stephen King novel, The Outsider. The quote was something along the lines of “being late is the wrong way to make a good first impression.” I read that, agreed with it, dug it, and knew I wanted to find a way to share it; now I have.

So, I’m not on some rant about people always being late. It doesn’t matter much to me if other people are late. Like I said, I don’t have to suffer others’ tardiness often. I have to suffer my own, and I do. That’s why I’m almost always on time.

I’m on time, and that’s what matters to me. It matters to me because I’m better when I’m on time. Work is the prime situation, as work it the place more people have to arrive at on time than any other.

Once I get to work, if I have a ten minute cushion before I have to step behind the bar my time there will be so much better. I don’t go through any great rituals, no deep knee-bends or coffee prep; there’s nothing like that. I always get tickled when people feel compelled to not only tell me that they are at work early every day but also what they do with that time. I sometimes think to reply, “I try to be at work a few minutes early every day, and I spend that time not being late.” 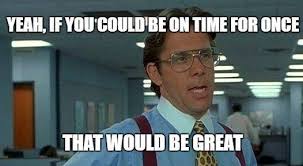 I think this could be the same for you. If you’re a person who is normally tardy or right on time, I dare you to take two weeks and see if you can be ten minutes early for everything. I’ll make some predictions:

Thanks to Misslys20 for the awesome picture. Here’s a link to her site.

I totally believe that being on time as a rule can do all of these things for you.

Going back to that quote, think about the quote upon which it is based: You never get a second chance to make a good first impression. We think of that, and it brings to mind potential employers, pending in-laws, and generally sizable relationships in our lives; still, most of us make many first impressions every day, especially those in the business world. Being punctual is a central part of how well I make those first impressions, and there is no doubt in my mind that my success in the business world is largely based on my attention to this.

I’d love to see you give it a try, and I’ll be waiting to hear how it goes for you.

Until then, be blessed and well.

2 Replies to “What if everyone was always on time?”